Confronting commas on the SAT writing and language section 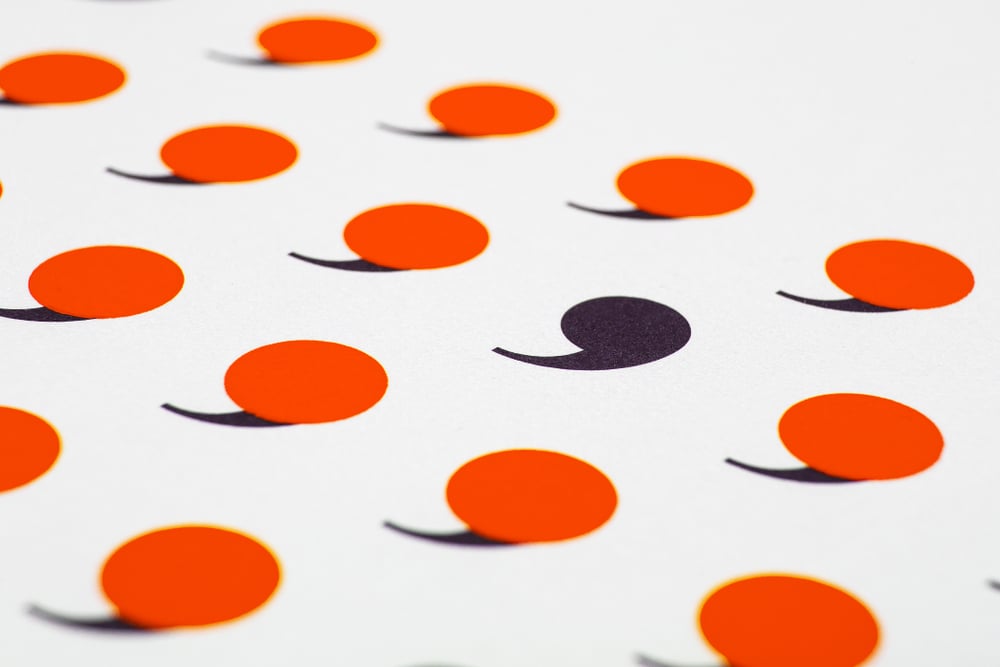 You see commas everywhere when you're reading, and you may put them everywhere when you're writing, but do you really know when to properly use this tricky punctuation mark? The SAT requires you to know exactly when a comma is either necessary or obstructive, so it is important to take the time to learn comma rules as you prepare for the writing and language section of the test. To help you get started, here are a few scenarios that require the use of a comma:

An independent clause is just what it sounds like: a sentence that can stand on its own because it has at least one subject and one verb. In other words, an independent clause is a complete sentence. When you want to connect two of these clauses together, one option you have is to use a comma and a conjunction. Know that your conjunctions are for, and, nor, but, or, yet, so – you can remember them using the acronym FANBOYS.

I went to the dog park, and I saw a cat.

Notice that both clauses have a subject, "I", and there is a fanboy, "and", right in the middle with the connecting comma.

I went to the dog park and I saw a cat.

The first example is missing the fanboy, and the second is lacking a comma.

You could connect the two ideas with only a fanboy if there is no repetition of the subject.

I went to the dog park and saw a cat.

Since the second part of this sentence is not an independent clause, there is no comma needed. Instead, this sentence contains a list with two item.

Because she was such a strong student, she received an A.

Despite the rain, we decided to go for a walk.

Even though he was tall, he still couldn’t reach the top shelf.

Notice how the clause that comes after the comma always begins with a subject.

This concept can be tricky, so let’s look at an example:

My bunny, the fluffiest bunny in the world, loves carrots.

Notice the appositive — "the fluffiest bunny in the world" — surrounded by commas. The way to check whether the commas are appropriate is to remove the appositive from the sentence to see if it still makes sense.

My bunny, the fluffiest bunny in the word, loves carrots.

It works: we still have a subject and the verb that the subject is doing, so the sentence is complete. Let’s look at a more ambiguous case. Consider whether commas need to be added to the following sentence:

Editor-in-Chief Charlotte Dobbs spends most of her Mondays sitting in meetings.

Editor-in-Chief, Charlotte Dobbs, spends most of her Mondays sitting in meetings.

Editor-in-Chief, Charlotte Dobbs, spends most of her Mondays sitting in meetings.

Editor in Chief spends most of her Mondays sitting in meetings.

There’s something missing. In order for this sentence to make sense, we would need an article, or a the or an, at the beginning of this sentence. Since the sentence doesn’t work when what’s in commas is removed, we should not have the commas there at all!

The original sentence, which contained a long title ahead of the name, was correct without commas:

Editor-in-Chief Charlotte Dobbs spends most of her Mondays sitting in meetings.

August 10, 2022 How to prove the Pythagorean Theorem
August 8, 2022 10 steps to completing your college essay before school starts
August 3, 2022 Go from surviving to thriving during exam prep
August 1, 2022 Where to begin on the personal essay
July 22, 2022 How to get a top research internship in high school
July 4, 2022 How to solve (almost) any math problem
June 24, 2022 How to be a prodigy (in two very difficult steps)
June 20, 2022 Application essays: the power of story
June 17, 2022 The key to cracking standardized tests
June 13, 2022 3 tips on how to find your first research mentor
See all
navigate_beforeEdit Filters closeClose
Clear Tags closeClose