How to use root words to learn vocabulary 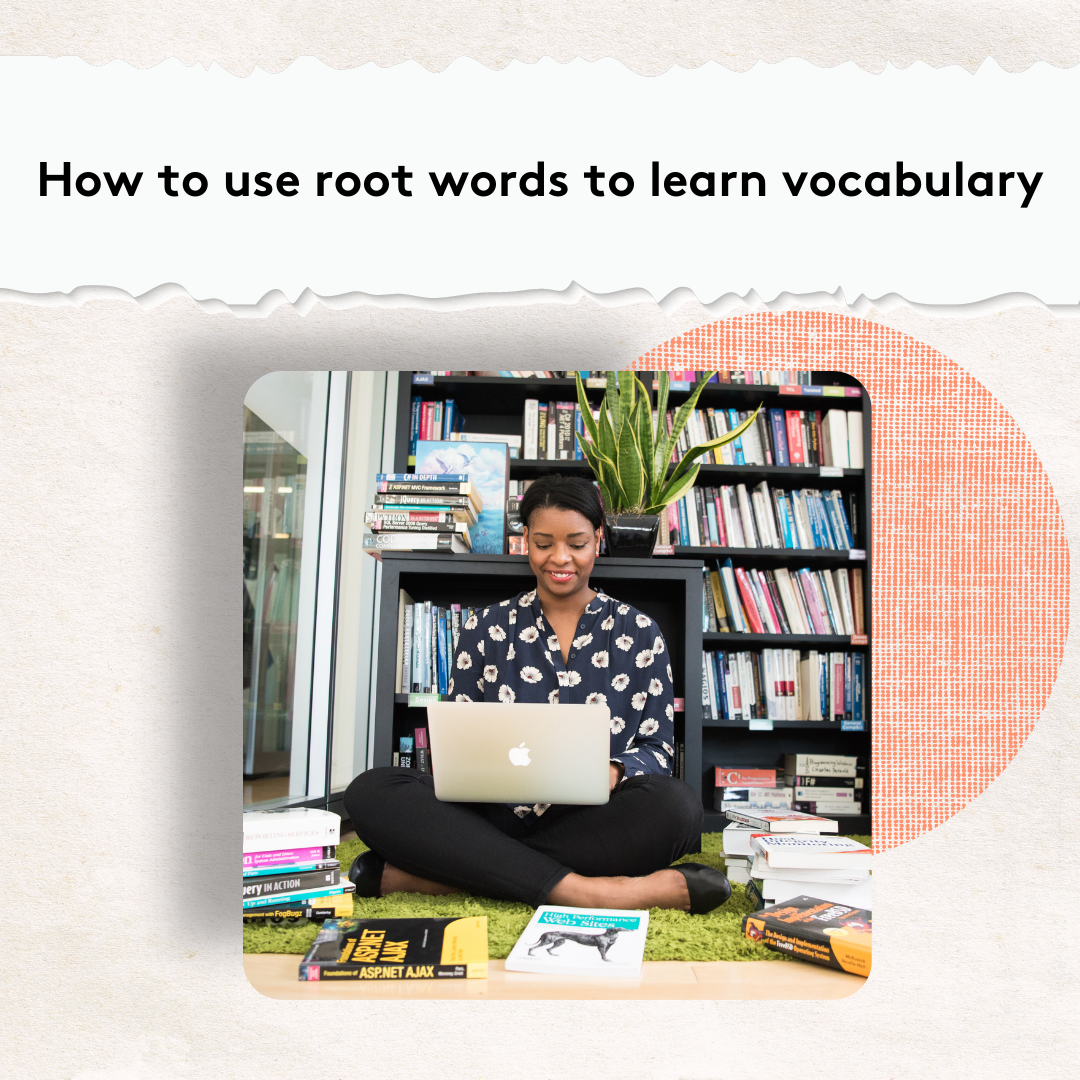 Retaining new English vocabulary is challenging, whether you’re learning English for the first time or studying for standardized tests like the SAT or GRE. The challenge arises, in part, from the sheer volume of words in English. English’s massive lexicon comes from words in several other languages, and learning some of these words—more often fragments of words—can give you a learning advantage.

We often call these fragments roots, because other words grow from them like plants. Greek and Latin roots are most useful to learn; since I study the latter language, I’ll be focusing on Latin roots in this post.

The root of a word won’t give you the word’s exact definition, but rather clues to its meaning. These clues can help you retain exact definitions by triggering your memory when you see the part of the word that comes from the root.

Here’s a classic example: the root mal- comes from the Latin word for bad. If you speak Romance languages, like Spanish or French, you’ll probably recognize this root. You’ll also have an advantage in learning English vocabulary because Romance languages developed from Latin. (Can you figure out the root of Romance by thinking about the people who first spoke Latin?)

You can see the root mal- in English words like

You can also see the root as a prefix in the word maladjusted (poorly adjusted). You can even see it in made-up names like Maleficent from Sleeping Beauty.

Knowing the root word mal- helps your learning in at least four ways.

A lot of English teachers will do what I just did: they’ll introduce a root—or several—with relevant English words. This method is useful, but it restricts your vocabulary to what fits in a list of previously assembled roots. I’ll show you how you can use roots for the vocabulary you need to learn.

Instead of tailoring your vocabulary to a list of roots, you can tailor your roots to a list of vocabulary. The secret to this method is etymology, the study of where words come from (and how their meanings have changed). We say that we’ve found a word’s etymology when we can trace its development backwards through time, to a probable origin. When English words have Latin roots, you can usually trace them back through French, and then to Latin.

A word’s origin is usually listed as a full word in another language, not necessarily the most basic root. We can usually figure out the root by looking at the origin word—but hey, I’m getting ahead of myself. Let’s start at the beginning.

Step One: Choose and define your word.

Choose a word you want to study. If you are looking for a word’s root, you can start by finding its etymology. Look up the word in an etymology dictionary: I recommend the Online Etymology Dictionary.

If you make a successful search, you’ll get the word’s dictionary entry. This will usually start with the word’s current (and sometimes historical) definitions. Then you’ll see a word like “from,” which signals the journey back to the word’s origins.

Let’s say we want to define and remember the adjective primeval. When we look it up in our etymology dictionary, we first get the definition: “of or belonging to the first age.” So, something primeval is ancient, from the world’s earliest times.

Let’s note down what we’ve found in a table.

Step Two: Find an origin for the word.

In the entry, we keep reading through some stuff about the 1650s and then we see the word “from"! As you read the part of the entry after “from,” imagine that you’re going further back in time, possibly through a few other languages. Here, we’re focusing on words with Latin roots. You should stop at the last Latin word because that’s usually the origin closest to a root we’re looking for. As I said before, the origin is usually a full word, not a basic root.

Before you move on, check to see how the meaning of the origin word relates to the word you’re studying. Remember, this relationship is the motivation for learning words this way!

Here’s where we are so far:

We’ve just gotten to “from” in the word’s entry, and we now see “from primus “first” + aevum “an age.”” So, we have two origin words in Latin. I’m going to underline and focus on primus because I can already think of related words (like primary). If you’re doing this process for another word and also find two origins, you can try doing the next steps with both origins and see what happens.

To find the root, it’s useful to have a list of roots, or a root guide. You can try putting “list of Greek and Latin roots” into a search engine to find your own, but here is one I like to use.

Since the root is usually at the beginning of the origin, you can look for a root to match your origin by scrolling alphabetically, or you can use ctrl-F and start slowly typing the origin word. It might take you a few tries to find a root matching your origin word, and you might even need to type “root for primus” into your search engine.

Here’s where we are so far:

If we go to the row of roots that start with “P” in the root word guide, we’ll find an entry for “prim-” meaning first. So now we understand that the “prim” in primus signifies meaning, and the “us” signifies something else (a masculine nominative ending, for those of you studying Latin).

Now for the fun part! Once you’ve found a root, see if there are other English words that come from the root. They might be words you already know or words you want to define to supplement your vocabulary.

By looking at the entry for “prim-” we can see the additional words primary and primitive. I can also think of primordial.

Using this method, you can define new words for yourself, find their roots, and connect them to other, related words. I recommend keeping a section in the back of your notebook for a table like the one I’ve modeled above.

I wrote out the method in a lot of detail, so it seems like a long process. Once you start practicing, though, the process shouldn’t take very long. You can do it as you learn new vocabulary and reap the benefits of knowing roots!

I’ve tested each word on the following list using the method above and the resources (etymology dictionary and root guide) I’ve recommended. You should be able to find definitions, origin words, roots, and related words for the following: