What is the pituitary gland?

Even though the pituitary gland is about the size of a pea, it plays a very important role in regulating a lot of our body’s endocrine functions. Located in an area known as the sella turcica at the base of the brain and suspended from the hypothalamus by a stalk, the pituitary gland consists of two parts: the anterior/front lobe (which accounts for the majority of the pituitary gland’s weight), and the posterior/back lobe.

Development of the Pituitary Gland 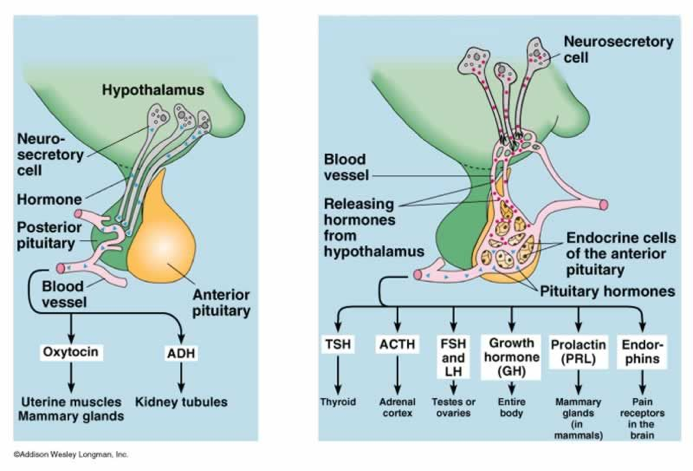 For the anterior pituitary lobe, think FLAT PEG for the following hormones:

FSH — Follicle Stimulating Hormone, which promotes ovarian follicle development, estrogen secretion in females, and spermatogenesis in the Sertoli cells of the testes

Endorphins — often triggered by exercise, endorphins play a major role in the body’s inhibitory response to pain and can also lead to feelings of euphoria

GH — Growth Hormone, which stimulates production of a molecule called IGF (Insulin-like Growth Factor 1) by the liver to lead to long bone growth

The posterior pituitary, on the other hand, only secretes the following two hormones:

ADH — Antidiuretic Hormone (also called Vasopressin), which helps our kidneys manage the amount of water in our body to regulate blood pressure and volume

Oxytocin — a hormone that plays a role in social bonding, sexual reproduction and childbirth

In summary, understanding the origins of the two lobes of the pituitary gland can help you differentiate between the anterior lobe, which makes and secretes its own hormones (think: FLAT PEG!), and the posterior lobe, which receives hormones made by the hypothalamus and stores them until it is signaled to release them (ADH, oxytocin).

December 2, 2022 Perfecting the internship process from start to finish
November 28, 2022 How to prepare for the Texas Medical & Dental Schools Application Services
November 25, 2022 Why learn to write?
November 23, 2022 How to participate in class without saying a word
November 18, 2022 Decoding and comprehension: the two components of learning how to read
November 16, 2022 The physics behind hybrid vehicles
November 14, 2022 Don’t think you’re a scientist? Think again!
November 11, 2022 How to navigate a computer science major
November 4, 2022 How to ace medical school interviews
October 31, 2022 The three pillars of time management
See all
navigate_beforeEdit Filters closeClose
Clear Tags closeClose