Learning amino acid structures is a challenging part of biology and biochemistry coursework. Many students feel totally overwhelmed by the task. The best way to master this skill is lots of repetition (here is a link to a Sporcle quiz that may help you with the repetition part) but it can be helpful to have tricks and mnemonics to get you started. Below is a chart with some mnemonics and tricks that I have collected over the years - hopefully this will be a good jumping off point for your amino acid mastery!

Glycine is the most simple amino acid. It's best to just memorize that this important amino acid has a functional group that only contains a hydrogen!

This amino acid is the only one that starts with a V and the functional group as a V shape! 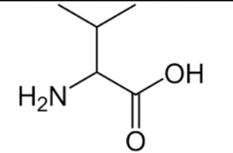 You can think of Leucine as a "looser" version of Valine with a slightly longer R-group.

Isoleucine is an isomer of Leucine! For those that haven't taken chemistry yet, an isomer is a molecule that has the same chemical formula but a different arrangement of atoms. You can remember which is which because Leucine has a simple name, and a simpler (less lopsided) arrangement of atoms than isoleucine does. 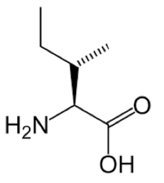 Proline is structurally unique and is often found in turns. Its side chain loops back around and binds with itself, which makes it look like the loop in the letter "P" for Proline!

Methionine has a short 2 carbon chain followed by a sulfur and then a methyl group. You can remember this because the Met is short for methyl and in chemistry thi indicates the presence of sulfur! 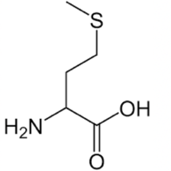 Cysteine starts with an "ss" sound and it is the only amino acid that makes an S-S double bond. In fact, only one other amino acid side chain contains sulfur (methionine) but it is not at the end of the R-group and it cannot form S-S bonds. Here is another goofy tip that I learned as an undergraduate: when you think of cysteine, picture the famous painting in the Sistine chapel of Adam and God touching fingers! It looks a little bit like a bond forming. That should help you remember that cysteine contains S and is the only amino acid capable of S-S bond formation.

Tyrosine looks like a phenylalanine with an OH group attached to the phenyl group. You can remember this because the first part of this amino acid name (tyr) kind of sounds like tire, which should remind you that the R group contains a tire-shaped phenyl group. Tyr is followed by the letter "o", which should remind you that an -OH group is attached to the phenyl. 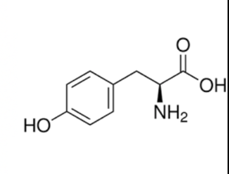 And of course, you can't forget...

Serine is similar to cysteine in structure and in name! The only difference is that the -SH group is swapped out for an -OH group. Here is a mnemonic to help you remember that: OH no, a STY! The amino acids that contain an -OH group are serine, threonine, and tyrosine, and their one letter abbreviations are S, T, and Y. 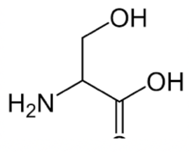 You can recognize threonine because it has three things sticking off the carbon of the R group: a hydrogen, a hydroxyl group, and a methyl group.

Aspartate and Glutamate are very similar in structure! They both have an R group consisting of a carbon chain ending with a carboxyl group. The only difference is that aspartate has only 1 C and glutamate has 2 Cs. Here are two was to remember which is which: 1) A comes before G in the alphabet so aspartate is shorter than glutamate and 2) Aspartate has spart in it, which sounds a lot like spartan so it must have fewer Cs. Glutamate has glut in it so it must be greedy and have more Cs. You can tell these amino acids apart from the very similar Glutamine and Arginine amino acids because they end in -ate, so they must contain a carboxyl group!

Last, but not least!

Lysine's R group contains a carbon chain ending in a nitrogen. It is the straightest of the HAL nitrogen-containing side chains, so you can remember it because Lysine is the line-shaped HAL amino acid.

Histidine is the final HAL amino acid. It has a short 2 carbon chain and then a ring containing two nitrogen.

Asparagine and glutamine are really easy to remember once you know glutamate and aspartate! The only difference is that they have an amide group that replaces the carboxyl group after the carbons. You can remember this distinction because the -ine suffix indicates the presence of nitrogen. 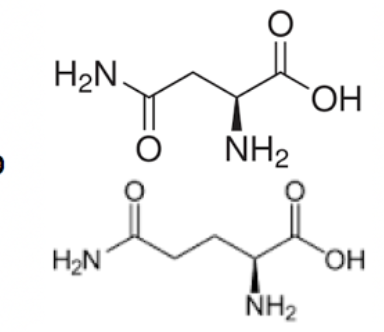 Now you have complete access to THE definitive study key on amino acids!

May 18, 2022 How to study for Chinese dictation quizzes
May 16, 2022 How to ask good questions during information sessions
May 13, 2022 An introduction to phrase structure rules and word order typology
May 11, 2022 How to ethically use WolframAlpha, Mathway, and Photomath
May 9, 2022 Be a STAR: strategy for college interviews, job interviews, and more
May 4, 2022 Understanding the central limit theorem
May 2, 2022 Einstein’s proof of E = mc^2
April 27, 2022 The dreaded “P” word
April 22, 2022 Suitcases and schedule scrapes: “packing” more punch into limited study time
April 18, 2022 Succeeding as a STEM major
See all
navigate_beforeEdit Filters closeClose
Clear Tags closeClose