Why does English borrow so many words from other languages?

The Canadian blogger and free-lance reviewer James Nicoll created the following epigram on the English language: "English doesn't borrow from other languages. English follows other languages down dark alleys, knocks them over and goes through their pockets for loose grammar."

This vivid image of English, although somewhat harsh, is also based on truth. More than in other languages, the evolution English has remained somewhat fluid, allowing for new words to be invented or accepted into the official lexicon. The influence of other languages on English is especially visible in the number of borrowed, or loan, words. Borrowed words are words that are adopted from one language into another with little or no alteration. (The word epigram itself was originally a Latin word, composed of Greek roots: epi for "upon/in addition" and gramma.)

In fact, Dictionary.com suggests that about eighty percent of the words in the English dictionary derive from words of non-English origin. The following chart breaks down the most common origins of words that make up the English language. 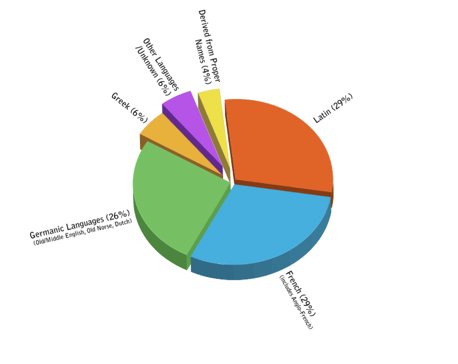 One of the reasons for the lack of uniformity within the English language is that, unlike Romance languages, for example, English-speaking countries have never had a formally recognized national academy to monitor the words that enter and exit the language. According to a BBC article, the practice of borrowing words into English has continued even in the last several decades, with words borrowed from languages like Japanese (izakaya, a bar food), Hindi (tarka dal, an Indian lentil-based dish), and Italian (affogato, a coffee-based drink with gelato) that have now been incorporated into the official English dictionaries.

The majority of words borrowed into English across diverse time periods have French and Latin roots.

Below are some words that we commonly use in English perhaps without realizing that they are not actually English at all. (In certain cases, the correct spelling in the respective foreign language has been modified to adapt to English spelling or pronunciation conventions).

Fun fact: many of the states in the United States are named after Spanish words, including Arizona (from Spanish for "little spring"), California (a fictional island from a 16th century Spanish novel), Montana (Spanish for "mountain") and Nevada ("snowy").

June 27, 2022 Units: the hints hidden in every physics and engineering problem
June 24, 2022 How to be a prodigy (in two very difficult steps)
June 20, 2022 Application essays: the power of story
June 17, 2022 The key to cracking standardized tests
June 13, 2022 3 tips on how to find your first research mentor
June 8, 2022 5 weird moments in European history
May 20, 2022 3 tips for more effective studying
May 18, 2022 How to study for Chinese dictation quizzes
May 13, 2022 An introduction to phrase structure rules and word order typology
May 11, 2022 How to ethically use WolframAlpha, Mathway, and Photomath
See all
navigate_beforeEdit Filters closeClose
Clear Tags closeClose