No butter? No bother! How context impacts meaning when speaking a language 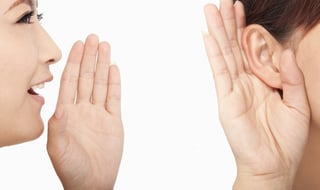 A friend and I recently traveled to Dublin, where we were struck by how accessible the history and beauty of the city seemed, in a way that was easy to get to know. The people we encountered were friendly and eager to strike up a conversation, and they often did – with what we considered wonderfully melodic Irish accents. Notwithstanding the fact that the spoken language there is also English, however, we were not able to catch the meaning of every word we heard. One evening at a casual local restaurant, one of the waitresses who took our order followed up with what we heard as "no butter?" We were confused because it seemed an unlikely question, to have butter or not, on the dish my friend had ordered. The waitress, on seeing our perplexed faces, quickly clarified with a smile, "no worries!"

What a neat phrase, we thought! In Ireland, it would seem, they say "no butter" to mean "no worries." This makes sense because Ireland is famous for its high quality butter – in fact, the Irish at one point consumed more butter per capita than the rest of the world, according to a Bon Appétit article.

When we looked up the phrase later on, to learn its origin, we discovered that, along with the person who had written a post about it, we had actually misheard the phrase "no bother" and mistaken it for "butter." After having a good laugh and feeling grateful for not repeating this newfound but incorrect expression in public, we wondered about the effect of the way words sound on our interpretation of language. Even in a language that, in theory, we already recognize.

In the context of dinner at a restaurant, "butter" makes more sense than in just any random setting because it has to do with food. In fact, one of the appetizers on the menu was homemade bread with bacon butter and jam (a house specialty). Maybe subconsciously we expected a word related to the items we had just been reading on the menu. But why were we convinced we had heard one thing when it was actually another entirely?

It turns out that recent research sheds light on how our expectations shape our perception of spoken language. This phenomenon manifests itself especially often when we mishear song lyrics. Even after learning that our first impression was incorrect, the words we are more likely to have memorized and continue to recite are those that we misheard. A famous example of lyrics with ambiguous sound and meaning is Jimi Hendrix' Purple Haze. "'Scuse me while I kiss this guy" – the lyrics that people often hear – sounds very similar to the song's original words "'Scuse me while I kiss the sky". The only real difference in sound lies in our perception of where one syllable ends and the next begins. Unless we have the written text in front of us to confirm the phonetics we hear, we are left to our own devices to interpret the sound and assign it meaning based on what we expect, what we predict, and, sometimes, what we wish to hear.

The common occurrence of mishearing words has a name: mondegreen, which the previously-cited New Yorker article explains is a misunderstood word deriving from misheard song lyrics. Its origin exemplifies the phenomenon's meaning itself, as it arose from a writer's own misinterpretation of a line from a ballad when read aloud: "laid him on the green" was mistaken for "Lady Mondegreen."

The science behind mondegreens has reemerged recently in relation to a Taylor Swift song by the title "Blank Space." The song's lyric "got a long list of ex-lovers" has been widely interpreted as "lonely Starbucks lovers". As the linked video explaining this science points out, the breaks in syllables and placement of corresponding emphasis alters how we understand the sounds we receive. For non-native speakers who may be less familiar with the natural cadences and speech patterns of a particular language, the chances of mishearing a word or phrase are even greater. As they are, it would seem, for native speakers of a language who simply are not as fluent at understanding the diverse accents the language comprises.

Get support in your studies of the English language by connecting with one of our incredible tutors!

Are you interested in reading more on the quirks of the English language? Check out some of these posts below:

How do I Succeed as an ESL International Student? 8 Essential Solutions