An introduction to resonance

Arguably one of the most important topics you will learn in your organic chemistry course, resonance is something that seems like it makes absolutely no sense upon first glance. What does it mean, why should I care about it, and how do I use this information to supplement my understanding of organic chemistry at large? All great questions!

Resonance is the delocalization of electrons in a molecule.

This means that, rather than keeping electrons condensed to a tight space, they are allowed to roam more freely which results in stabilization. It can often be difficult to represent this in a single Lewis structure, so we instead have to draw the so-called resonance structures of a molecule to give a more accurate depiction of all the possible locations electrons can be found and their relative distributions.

The molecule acetate is depicted above where a negative formal charge is centered on the right-hand oxygen and the double bond on the upper C-O bond. However, this drawing isn't completely accurate. The true structure of acetate looks something more like this:

Here, we see that the negative formal charge is actually shared across both oxygens. The double bond is also shared, shown through the use of dashed bonds that represent something in between a single and double bond. We can determine this "true" structure of molecules by drawing the resonance structures of acetate.

Combining all of the resonance structures together is what gives us the true structure.

Thus, it is very important to keep in mind: resonance structures are not a depiction of the actual molecule. Rather, they are individual showcases of where electrons can be found in a given molecule. The true structure is a combination of all possible resonance forms.

So how do we actually know when resonance is present? Not all molecules are so fortunate to have access to it.

Things to look for:

When we want to figure out what the possible resonance structures look like, electron movements can only occur in a few set cases:

Having lone pairs, pi bonds, etc. alone does not necessarily mean a molecule has resonance, however.

Here I’ll do a short walkthrough of how you might think about solving a resonance problem using the molecule shown below. These are some questions that will be valuable to answer: 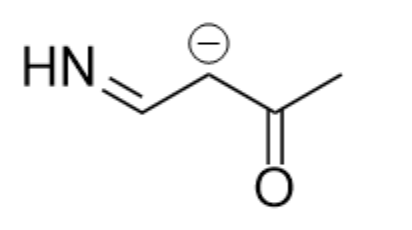 Starting from the first question, does the molecule have resonance? In order to have resonance, we need some number of lone pairs or pi bonds present adjacent to each other. In the given molecule, we can identify a lone pair and two adjacent double bonds, a good sign we have resonance. 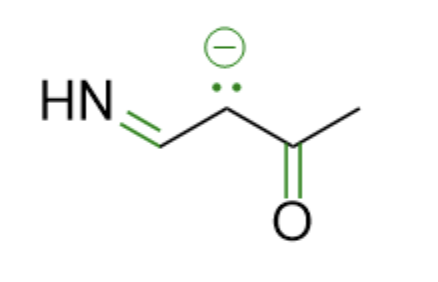 Next, let’s try drawing the possible resonance structures. We can reference the electron movement options discussed earlier. With this structure, we only have one choice: Lone pair into an adjacent pi bond. Since we have two pi bonds, we have two directions our lone pair can move towards (differentiated by color).

Finally, of the three structures above, which is the most favorable (and thereby will contribute the most to what the overall “true” structure looks like)? All three structures have full octets on all atoms and the same number of formal charges, so the only main difference is the atom holding the formal charge. Since it is a negative charge (meaning lots of electron density), we want it to be on a highly electronegative atom. Between nitrogen, carbon, and oxygen, oxygen is the most electronegative, so the red resonance structure will be our most favorable.

The Role of Resonance

Why does resonance actually matter? Resonance showcases the delocalization of electrons within a molecule, evenly distributing its electrons across a greater space. This is valuable because all electrons are negatively charged and thereby repel each other, so the further apart electrons are from each other, the weaker the repulsion. This creates a more stable molecule.

Let's take a look at this phenomenon in an actual molecule. Acetic acid is aptly named for being an acidic molecule (pKa = 4.76). Its acidity can be attributed to the stability of its conjugate base, acetate. As we demonstrated earlier, the negative charge (and thereby electron density) in acetate is distributed across both oxygens equally rather than centralized on just one, which greatly stabilizes it.

On the other hand, let's look at 1,1-ethan-diol. The structure is very similar to acetic acid, but is missing the double bond. As a result, 1,1-ethan-diol is unable to access resonance in its conjugate base. The negative formal charge can't be split across the two oxygens - it is forced to remain on one, significantly destabilizing the molecule. This makes the pKa of 1,1-ethan-diol about 15.1, significantly less acidic than acetic acid.

This is just one example of the significant role resonance plays in chemistry. For now, the most important thing to acknowledge is how resonance plays a role in driving stability. As you continue your journey into organic chemistry, resonance will continue to pop back up, making it an essential topic to have a strong understanding of.