Beginning at the End: Strategies for (Calmly) Translating Latin 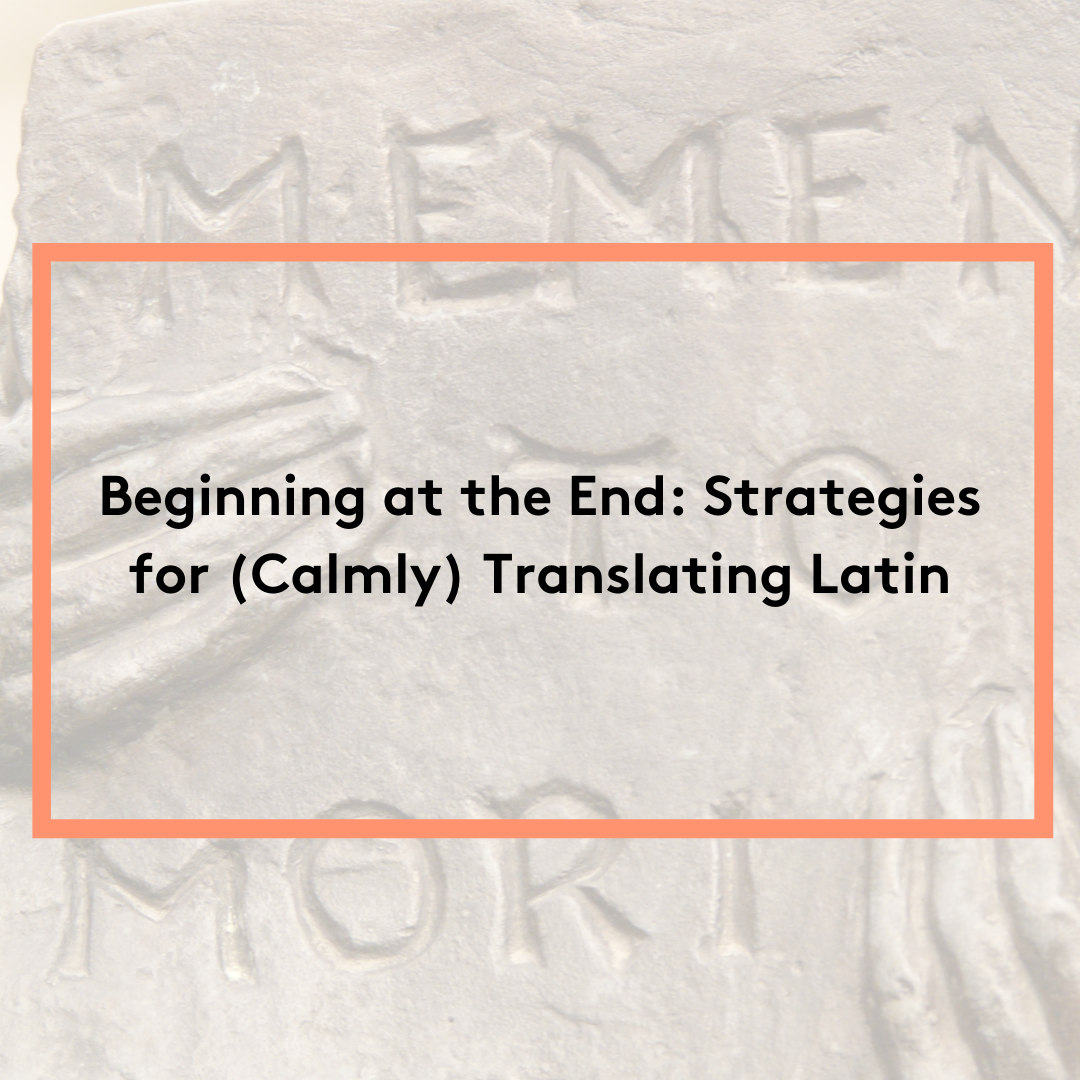 Many of us have been there. Learning a new, unfamiliar language, but feeling confident in our progress—until confronted with a solid block of text on a homework assignment or course assessment. Several things then tend to occur: first, icy terror, followed hard by an urge to start writing, leading ultimately to a wild race through the text and the attempted definition of every single word on the page. Because, of course, if the words are not all defined in the first thirty seconds of an exam, their meanings will be forgotten…

Well, thankfully, that is not quite true! In fact, as we will see, when beginning a language, we are often better served by initially leaving aside the meanings of words while we work through the text in other ways.

The feelings described above can be especially acute when learning an ancient language like Greek or Latin, for which reading as opposed to speaking skills are the most critical. In this context, a common misunderstanding is that the meaning, or semantic significance, of the words is their single most important feature—hence the impulse to define them immediately upon seeing them on the page. It is instead the syntactic function—the role that a given word plays within a larger group of words—that is most important for determining the meaning of a sentence. Rather than a mad dash through a sentence or block of text, we can think of translation as a deliberate, even slow, process that eventually yields rapid results. Translation, therefore, is not simply identifying the meaning of each word and attempting to string a sentence together. It is locating a function for each word and developing a sense of how these discrete functions exist in harmony. Semantic meaning is just one piece of the bigger puzzle!

We can use Latin as our example language. When approaching any Latin text, there is a series of questions that a beginning student can use to help break down a sentence and determine its meaning. The first rule, as we have seen, is—avoid panic! There is no need to dive willy-nilly into a block of text. The meanings of the words will come later and—trust me on this—you will still remember them. Instead, begin your translation like this:

1. Identify the verb forms, which in Latin often lurk at the end of the sentence. What do they tell us? What person and number is each verb? What kind of subject does each verb suggest (e.g. if a third-person plural verb, either an implied “they” or a separately expressed nominative plural subject)? Are there multiple subjects, perhaps joined by conjunctions such as et, atque, ac, or -que?

4. If the subject and object have been located, are there any other forms modifying them (i.e. in case, number, and gender agreement)?

5. What tense is the verb? What aspect? Is it defective (i.e. with only perfect, pluperfect, and future perfect forms)?

7. Can the semantic meaning of each word be determined? In the event of unfamiliar words, can you see the resemblance to any English borrowing (e.g. femina > “feminine” > “woman”)? Can you break the word down into constituent parts of a recognizable type (e.g. signifer > signi-fer > “standard; carrier” > standard-bearer)?

8. If the meaning of a word cannot be determined, identify its syntax as best you can by examining its inflected endings, and try to isolate it in your translation as much as possible (e.g. agricola *bonus* *pueros* malos in agris videt = “the *____* farmer sees the bad *____* in the fields”). As you can see, one, even two, unknown semantic meanings do not completely prevent translation!

Although usually located at the end of a given clause or sentence, the verb is most often the center of gravity. Thus, by beginning at the end, the rest of the sentence comes gradually into focus. With time and practice, this process will become increasingly fluid; translation really is just the act of reading. By treating it as a systematic method in the early stages of learning Latin (and other ancient, morphologically complex languages), you will dramatically reduce panic—and never dive headlong into a block of text again!

If you'd like support in making sense of your Latin assignments, we're here to help. Cambridge Coaching offers Latin tutoring services in New York and Boston in person, and anywhere else in the world online. We're happy to provide one-on-one Latin mentoring, and can help students at any level, from beginners to college students taking courses on Latin literature. The study of the classical world and its languages should be nothing less than exhilarating, but it’s important to recall that the benefits can be quite practical.

Check out some more posts on Latin studies below:

January 27, 2021 How to use root words to learn vocabulary
September 20, 2017 The top 3 reasons you should study Latin
November 8, 2015 5 things you need to study Classics to really understand
December 26, 2014 Latin Tutor: Why Should I Study Latin?
March 17, 2014 The benefits of taking Latin in high school
navigate_beforeEdit Filters closeClose
Clear Tags closeClose