Drawing the chair conformation of a pyranose ring

In this blog post, we will complete the following example problem:

Draw the chair conformation of α-d-galactopyranose

First, we must draw the Haworth structure of α-d-galactopyranose from the Fischer projection of d-galactose.

For the MCAT, you need to memorize this structure, as well as those of D-glucose, D-mannose, and D-fructose.

Note that we will not be covering the “long way” of converting a Fischer projection to a Haworth projection. For more on that topic, follow this link!

In our “shortcut” method, we will start with the skeleton of a pyranose ring and number the carbons as follows:

Note that the accepted convention is to place the oxygen atom in the back right position.

That takes care of the configuration at C5. Now let’s focus on the remaining positions. The configuration at the anomeric carbon (C1) is conveyed in the name of the pyranose ring form. The term alpha means that the OH group at C1 must be DOWN. A mnemonic that I use is: fish (alpha) swim in the sea (down), and birds (beta) fly in the sky (up). 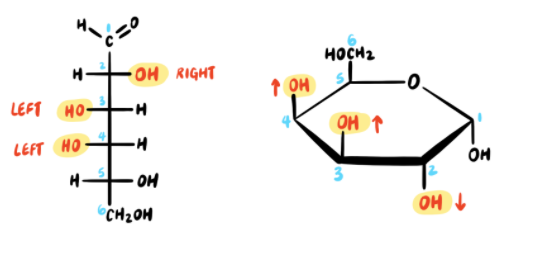 Now that we have our Haworth projection, we will draw the chair formation

First, draw the skeleton of a chair and number the carbons as follows:

Note how the oxygen is placed on the upper, rear-right corner.

The next step is to draw all substituents on the chair. Each substituent is labeled UP or DOWN and then placed in the appropriate position on the chair conformation:

And there we have it!

For practice, try the following problems:

Draw the chair conformation for each of the following compounds:

September 30, 2022 How to construct a literary thesis statement
September 28, 2022 Clarifying summary, analysis, and synthesis
September 21, 2022 Three tips for writing a persuasive essay
September 14, 2022 Capacitor confusion: basic pointers to salvage your sanity
September 12, 2022 Finding your why for your medical school statement
August 26, 2022 Demystifying MCAT physics
August 22, 2022 How to answer the “why medicine” question
August 12, 2022 How to become a successful software engineer
August 10, 2022 How to prove the Pythagorean Theorem
August 5, 2022 What are the soundness and completeness theorems in logic all about?
See all
navigate_beforeEdit Filters closeClose
Clear Tags closeClose