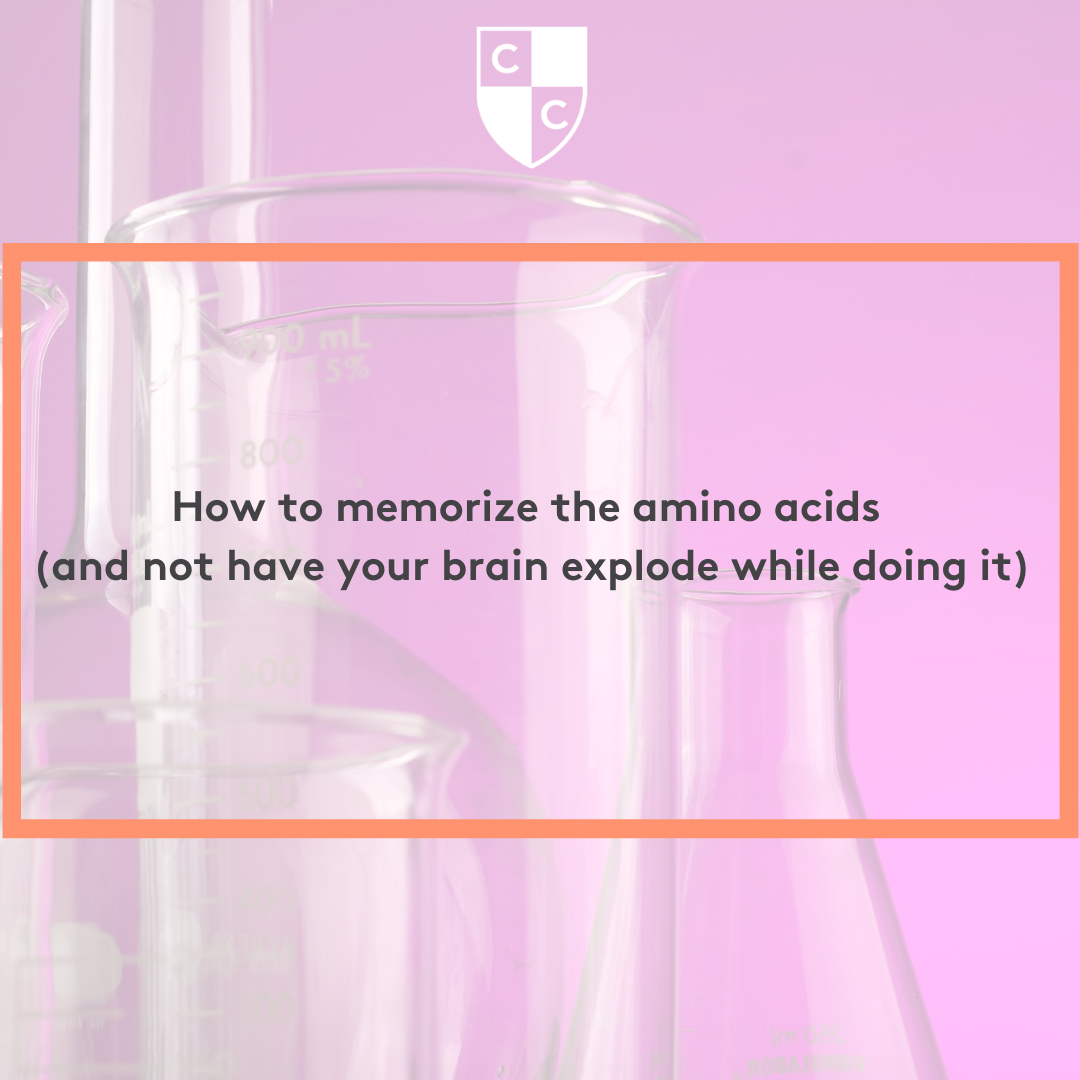 There comes a time in the life of any pre-med when they realize that, yes, they will actually have to memorize all 20 amino acids. Whether it’s for your biochemistry course or the MCAT (absolutely mandatory for the MCAT!), memorizing the amino acids can seem like an impossible task.

This article is designed to make that task feel a little less daunting.

You’ll most likely need to memorize the amino acid names (and abbreviations), structures, and properties—charged/uncharged, polar/nonpolar, and hydrophilic/hydrophobic. Each amino acid has a backbone with a basic amino group (-NH3) and an acidic carboxyl group (-COOH), plus an -R group that will dictate its properties—that is, how the amino acid behaves in the real world of biochemistry when part of an amino acid chain and interacting with the surrounding solutions and structures.

Below, I have compiled some tips and tricks for how to memorize each amino acid. Most of these should make obvious sense, though beware that a couple of the tips are a bit…weird—but my hope is that they’re just odd enough to become permanently seared into your brain!

Starting with the most straightforward amino acids…

Glycine (G) is the OG, the originator and simplest out of all the amino acids. Its structure is the standard amino acid backbone and a hydrogen “R” group. 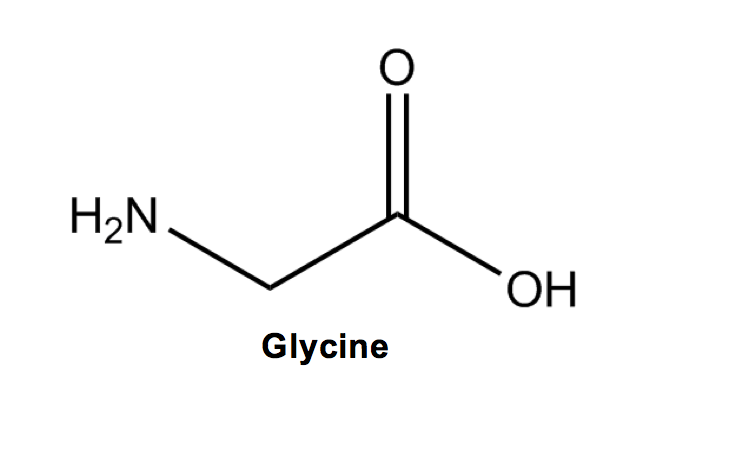 Next is Alanine (A), where we add our first methyl group to the backbone (A is the first letter in the alphabet).

After that is Valine (V), with two methyl groups added to alanine to conveniently resemble a V. 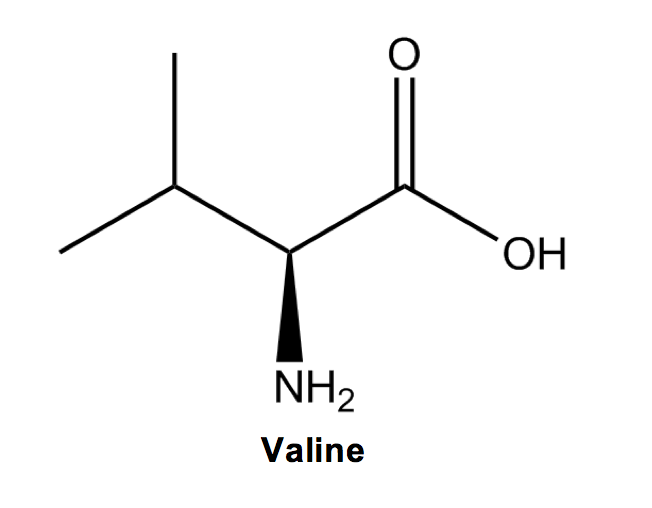 Leucine (L) and Isoleucine (I) are next. Their similar names hint at their structural similarities:

● Leucine (L) is similar to valine, except extended by one carbon bond (leucine is L-onger).

● Isoleucine (I) is similar to leucine, except that one of the methyl groups at the end has decided to ISO-late itself and move down by one carbon.

That wasn’t too bad! Let’s move on to some of our ringed amino acids…

Phenylalanine (F): If you’ve taken organic chemistry, phenylalanine should be an easy one because it’s like alanine, but with a phenyl group (aromatic carbon ring) attached. 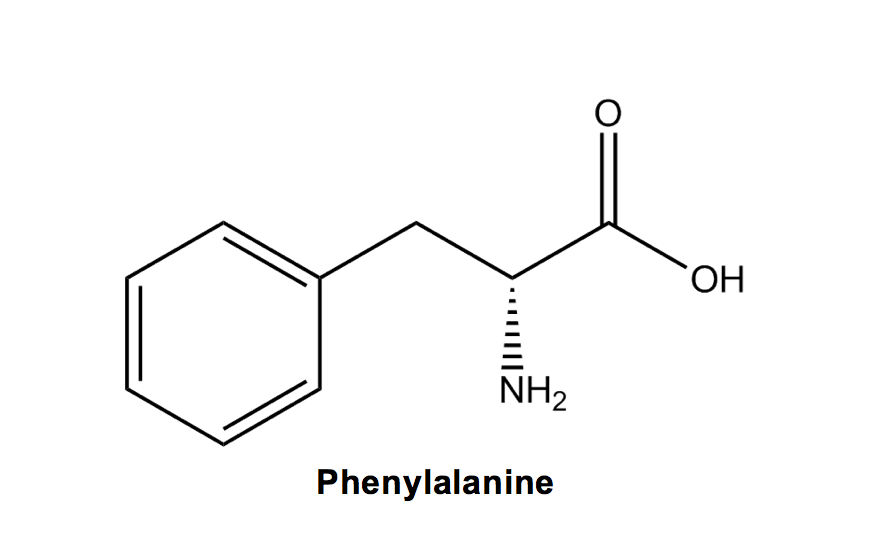 Tyrosine (Y): Okay, this one is kind of weird, but bear with me. Tyrosine kind of sounds like ‘tire-o-sine’, and looks like a car tire (the aromatic ring!) with an O (the -OH group!) attached. If that is the most nonsensical thing you’ve ever read, hopefully my crazy explanation is now imprinted into your mind and you’ll never forget tyrosine again!

Tryptophan (W) has the largest ring structure, and it FANS (phan!) out due to its double-ring structure. Just don’t forget that nitrogen (remember the N at the end of tryptophan)! 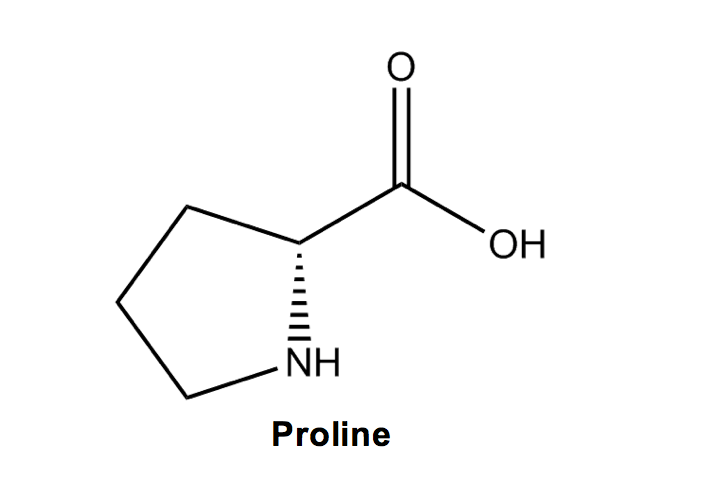 Next we have our acidic amino acids (and their first cousins)...

Aspartic Acid (D) and Glutamic Acid (E) are the only two acidic amino acids, and it therefore makes sense that they would be the only two with the carboxyl group, which can lose a hydrogen to become negatively charged. E (glutamic acid) is later in the alphabet than D (aspartic acid), which is how I remember that glutamic acid has an extra carbon bond in its R group!

Asparagine (N) and Glutamine (Q) are similar in both name and structure to their respective acidic counterparts, except that they have an amide instead of a carboxylic acid group. I remember this because their names each have an N while the acids’ do not.

Next we have our basic amino acids, which have a nitrogen that can gain positive charge…

Lysine (K) is a L-ong amino acid carbon chain, with an amino group at the end. How do you avoid confusing lysine and leucine? Remember that leucine and isoleucine are our dynamic duo! 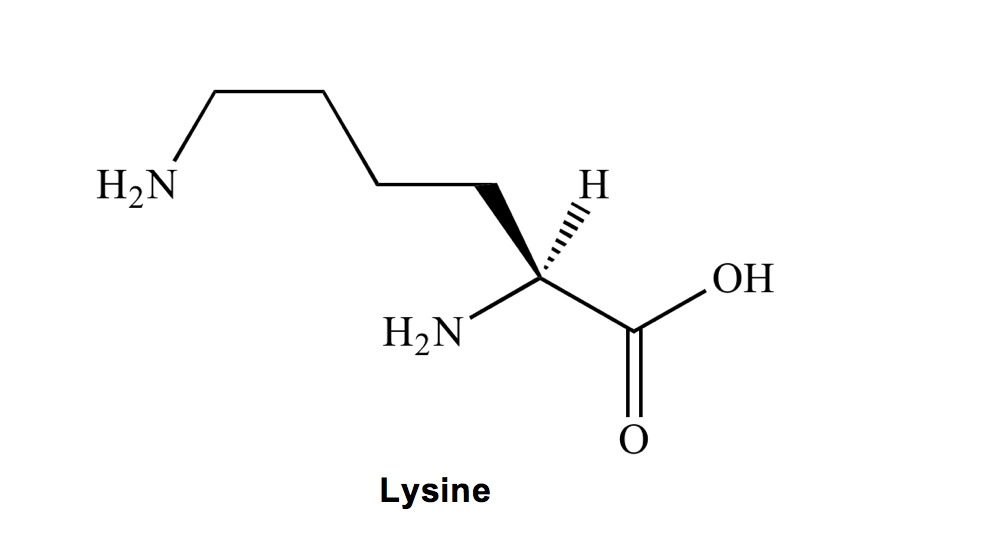 Histidine (H): This is another weird trick, but if you look at histidine’s structure, because its aromatic ring has two nitrogens, the remaining double bonds align to somewhat resemble the two outside lines in the letter H. Weird, I know, but hopefully another one you’ll now never forget! 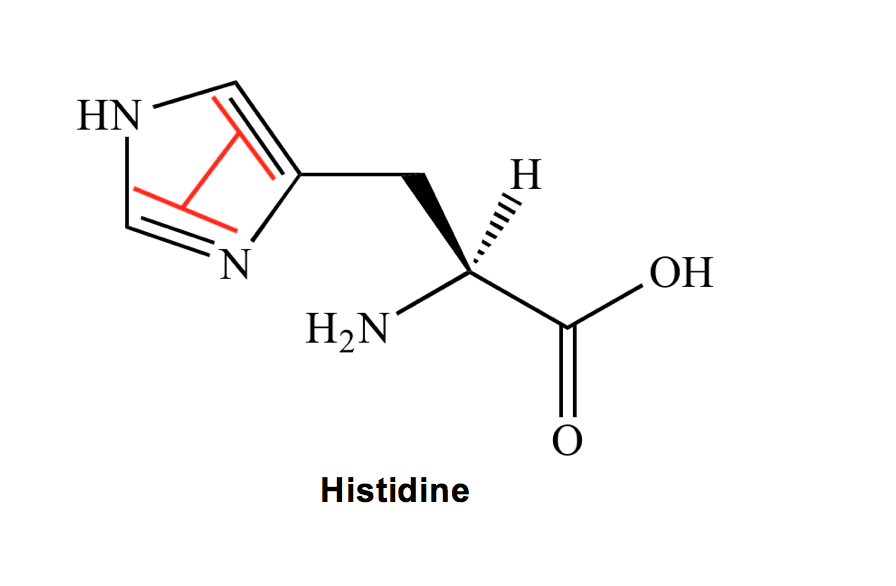 And finally, the sulfur and oxygen R groups…

Serine (S) and Threonine (T) I remember as two peas in a pod because they are conveniently next to each other in our amino acid alphabet! Serine has an -OH group at the end of the carbon chain, and for threonine, you THR-ow the O-H to the other carbon!

Cysteine (C): Cyssssssteine is the amino acid that makes dissssssulfide (disulfide) bridges within or between amino acid chains due to its highly reactive sulfhydryl group—very important to know for biochem! 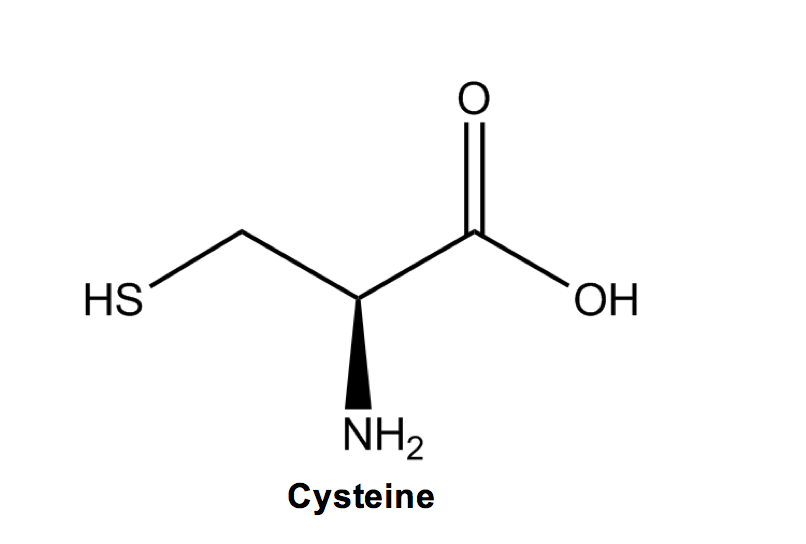 Methionine (M) has a THIO-ether group on it, characterized as a sulfur with two R groups attached. Structurally, the R group on methionine also most closely resembles an M out of any other amino acid! 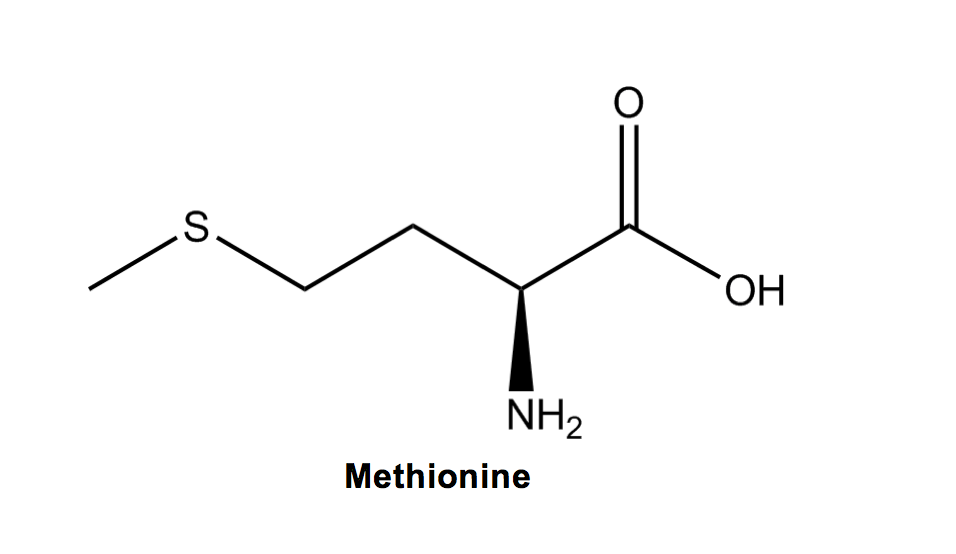 Once you have the structures memorized, understanding the properties is much easier! The charged amino acids have acidic (aspartic and glutamic acid) and basic (arginine, lysine, and histidine) R groups. Polar (but uncharged) amino acids are those with uneven polar bonds, like serine and glutamine. Hydrophobic and nonpolar amino acids are those with large carbon side chains and aromatic rings, like isoleucine and phenylalanine.

Finally, practice makes perfect! Try to take daily online quizzes to test your amino acid knowledge. If you are currently studying for the MCAT, I would highly recommend writing out the amino acid structures and properties every few days. With continuous practice and the tips I’ve compiled for you above, you should have these amino acids committed to memory in no time!

Taking the MCAT in 2020-21? Check out some other helpful blog posts below!:

So, your MCAT's been canceled, now what?

May 26, 2022 Why are you applying to our school? How to answer this common prompt.
May 24, 2022 Secondaries: diving into the diversity prompt
May 23, 2022 Make the most of your AMCAS Work and Activities
May 6, 2022 The truth about medical school personal statements: a strategic view
April 29, 2022 Four traits Harvard Medical School looks for in applicants
April 25, 2022 Regrouping amino acids for the MCAT
April 11, 2022 A simple approach to CARS questions
March 30, 2022 Start early: tips for medical school personal statements
March 18, 2022 How to interview for medical school when you’re not a strong interviewee
February 28, 2022 Writing medical school essays: prioritize depth
See all
navigate_beforeEdit Filters closeClose
Clear Tags closeClose