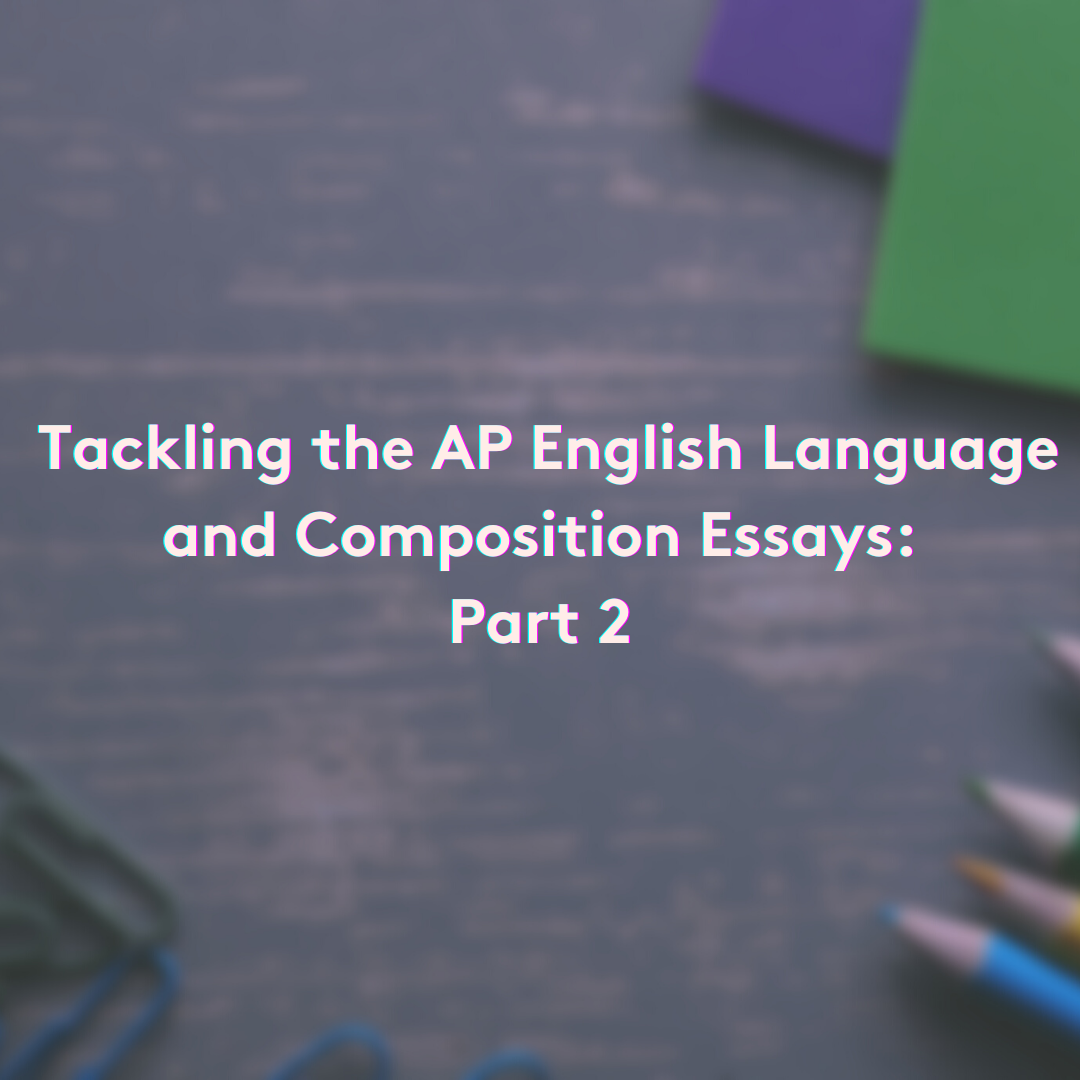 Welcome back! In Part 1 of this series, we covered some basic information about the AP Lang essays, as well as the first two major components of the process, “Organizing Your Time” and “Reading and Annotating.” In Part 2, we’ll look at the final four components.

Where we last left off, you had just finished reading the passage, while taking notes on the major tactics that it was using to achieve its aims (taking about 10 minutes or so). Next, you should take about 5 minutes to write an outline for your essay. This is a crucial step, and should not be skipped. If you take a few minutes now to outline your essay, you’ll end up saving time later: you’ll be able to write your essay more quickly, and you’ll be less likely to need to rewrite it.

Your thesis should state what you take to be the most important tactics and devices that the passage uses to achieve its aims. Fortunately for you, if you followed the steps for “Reading and Annotating,” you should already have a list of those in the margins. Your thesis can take any form you like, and many different types of theses can earn good scores. That said, there is one reliable formula that you should always feel safe applying: just enumerate what you take to be the three most important tactics/devices that the passage employs. You’ll notice that some of the College Board’s sample perfect-score essays use this tried-and-true method.

So, using this method, your thesis looks something like: “In this essay [or, title of the passage], the author [name] achieves [whatever the aim is] by X, Y, and Z [three major tactics].” Feel free to reword this to fit your material.

For your thesis to be successful, it should be clear and accurate. In other words, it should capture what the essay’s major tactics of achieving its aims are. This doesn’t mean there is a single right answer. But certain answers will be better than others. So, when it comes to constructing your thesis, you shouldn’t just choose any old tactics that you noted in the passage. You should choose those which seemed most important. They might be those that came up most frequently, or they might be those that seemed most central to making the essay’s main point (even if only used once, like, for example, an extended anecdote).

When it comes to structuring your response, there are a few good rules of thumb.

First, each body paragraph should make a single point. That point can be complex, but it should be able to be expressed as a single unit of thought. If you take the three-pronged approach to your thesis described above, each body paragraph will be devoted to describing one of the passage’s three most important persuasive tactics.

Second, each body paragraph should begin with a topic sentence that clearly and comprehensively states its basic point. A good topic sentence does not just “get the ball rolling” on the paragraph in question. Instead, it summarizes the point that the paragraph will make, in full, if not in detail.

But what order should the body paragraphs go in? In general, order your paragraphs from the most central/important tactic to the least central/important tactic. If you explain the more central tactics first, your reader will get a better sense, earlier on, of what the passage—in your estimation—actually looks like, making it easier for them to understand everything you end up saying about it.

Here’s an example to illustrate why: let’s say I was talking to you, and mentioned someone named “Louis.” You ask me: “Who’s Louis?” I might respond by saying something like: “Oh, Louis is my brother; he lives nearby, and has a mustache!” That would be normal enough. But what if I said: “Louis has a mustache! He’s my brother, and he lives nearby.” Well, that would be a bit odd. No one would say that because we want to know the most important thing about Louis first (that he is my brother) before we know a more incidental detail (that he has a mustache). The same is true for the passage you are describing: we want to know its core, argumentative tactics, before we begin to imagine its peripheral ones.

As a very general rule of thumb, essays that move from the most central to least central tactics will often move from discussing elements that have to do with reasoning, evidence, or core meaning to those that have to do with linguistic style or emotional appeal. The latter may often feel more like “the icing on the cake” (or, to put it another way: “the mustache on Louis”).

Now that it’s actually time to write out your outline in prose, there are a few things to consider:

Your introduction should achieve two things: first, it should provide a basic summary, in your own terms, of the passage’s central aim. Next, it should state your thesis. Your intro can be as short as two sentences, one summarizing the passage’s aim (“In X essay, author y attempts to do z”), and the next providing your thesis (“she makes her argument persuasively by….” Or “she makes us laugh and think by…”). Or it might be as long as four, if you’re a confident and speedy writer. Given your limited time and space, it shouldn’t go much longer than that.

Next, you have to write your body paragraphs. Each, as previously described, should begin with a topic sentence that states its major point. The paragraph should then proceed to do two more things: first, it should provide examples of the tactic being discussed, or evidence. And second, it should analyze each of those examples, explaining how they work. If there are many examples to analyze, use two or three. If there is only one, make sure to discuss it in depth, and give it the attention it deserves.

A quick guide on how to provide evidence, and analyze it:

Your body paragraphs should have heft to them. Length isn’t prized, but good essays do tend to take up some space on the page. If your paragraphs aren’t clocking in at four to five sentences or more, ask yourself: am I providing enough examples and describing them well enough? Am I doing enough analysis of how these tactics impact the reader?

Your concluding sentence...doesn’t really matter. Check out the sample perfect score essays on the College Board site and you’ll see they don’t spend more than 2-3 sentences here. You can either simply sum up what you’ve done, in slightly different terms, or add some extra flourish.

Now you know every piece your essay should include, and you’ve filled them in. But there is one more thing to consider: your sentences also have to be, well, nice. You’ll be graded, to some degree, on how clear, elegant, and grammatically correct your writing is (that’s, in large part, what the single “sophistication” point is for). Unfortunately, you can’t improve your prose overnight. Lovely, impeccable prose is the product of immersive reading and attentive writing, conducted over long periods of time. That being said, there are a few actions you can take, in the shorter term, to improve your prose-writing:

Whew! Looks like we’re done...with the Rhetoric essay at least. How are the Synthesis and Argument essays different? And how do these steps apply to them? Proceed to Part 3 for answers to those questions.

The AP Exams are an opportunity for you to deepen your academic engagement, demonstrate your readiness for college learning, and earn college credit. Our team of PhD candidates, composed of expert tutors like Tess, loves teaching AP material and helping students hone test taking strategies. Looking for customized AP support?

September 26, 2022 The puzzle pieces of an argument
June 17, 2022 The key to cracking standardized tests
February 9, 2022 How to use an outline to your advantage when you’re writing
January 17, 2022 The beauty of a reverse outline
December 1, 2021 Why I love teaching English
August 20, 2021 Reading is hard. But it doesn’t have to be.
June 30, 2021 How to organize a paragraph: the MEAL plan
May 31, 2021 How to remember what you read
April 21, 2021 Tackling the AP English Language and Composition Essays: Part 3
See all
navigate_beforeEdit Filters closeClose
Clear Tags closeClose