The immune system has many different components that can be difficult to keep track of at times. How do we distinguish between innate and adaptive immunity? Why are there so many types of T cells? And what are these MHC molecules that people keep talking about?

This blog post is an introductory guide to the immune system. Hopefully, this introduction will turn these different components into a beautiful picture that illustrates the incredible ways that our bodies work to protect us from foreign pathogens.

There are two main forms of immunity: innate and adaptive. The innate immune system is characterized as the first and second line of defense. This includes physical barriers, such as the skin and mucus membranes, that protect us from pathogens (first line) and different cell types and other molecules that launch a response once the pathogen breaches those barriers (second line). The innate immune system is non-specific: it does not care what exactly the pathogen is, it just knows that it is not supposed to be there and works to keep it out. By contrast, the adaptive immune system (third line of defense) is a specific form of immunity mediated primarily by our B and T cells. Because it is highly specific to the antigen, adaptive immunity takes longer to launch, usually several days.

The innate immune system typically begins when receptors on macrophages, a type of phagocytic cell, sense that a foreign pathogen is present in the body. These macrophages will launch themselves to the site of infection and begin phagocytosing (i.e. eating) the pathogen. At the same time, macrophages will release cytokines (signaling molecules that can stimulate different parts of the immune system) to recruit neutrophils. Neutrophils are another kind of phagocytic cell that are actually WAY better at the job than the macrophages. Think of it like the Lakers fumbling on court until Lebron decides to sub in. Once they arrive onsite, the neutrophils (AKA Lebron) take over and here’s where it gets interesting: neutrophils create “neutrophil extracellular traps,” which is when they blow their nucleus out to the surrounding tissue to trap the pathogen while the remaining enucleated neutrophil (basically a neutrophil zombie at this point!) continues to phagocytose the pathogen.

At the same time, the adaptive immune system starts to warm up.

Now this is where it gets a bit confusing for people. There are two main types of T cells: CD4+ T cells (T-helper cells) and CD8+ T cells (cytotoxic T cells). Production of T cells begins in the bone marrow and they mature in the thymus. Each of these T cells has a specific type of T cell receptor (TCR) that will only be stimulated by a certain kind of MHC molecule. The CD4+ T cell TCR must interact with MHC Class II molecules and the CD8+ T cell TCR must interact with MHC Class I molecules. APCs will have both MHC Class I and Class II on their cell surface so they can activate and stimulate either CD4+ or CD8+ T cells (Figure 1). 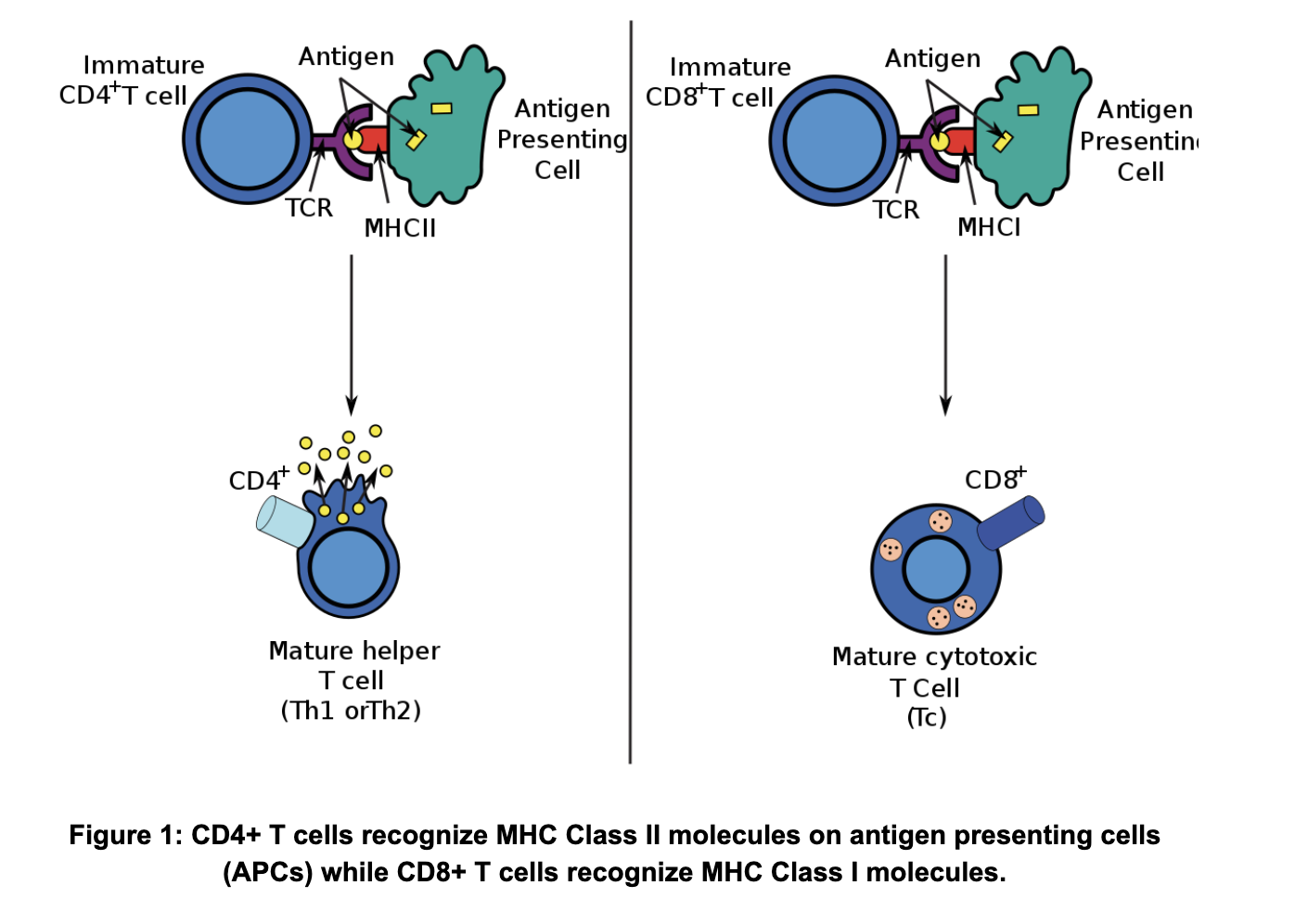 This distinction is only one of the differences between CD4+ and CD8+ T cells. They also have very different functions. CD8+ T cells (cytotoxic T cells) work by directly killing cells that are infected by an intracellular (i.e. inside the cell) pathogen, such as a virus. Infected cells will have peptides from these foreign intracellular pathogens on their own MHC Class I molecules which the CD8+ T cells will recognize to directly kill them. CD4+ T cells (T-helper cells) work not by direct killing, but by helping stimulate antibody production in B cells. This means that they typically recognize peptides from extracellular pathogens presented to them by APCs and their MHC Class II molecules. The CD4+ T cells will take this information and go stimulate B cells, which will go on to produce antibodies against said extracellular pathogen.

As previously mentioned, B cells are another important component of the adaptive immune system, responsible for the production of antibodies. B cells are made and mature in the bone marrow, after which they travel to the secondary lymphoid tissues like the lymph nodes, waiting to be activated. B cells can be activated in two main ways (Figure 2). The first is that they can recognize whole antigens with their B-cell receptors (BCR) which will stimulate a low level of clonal expansion that does not produce super specific antibodies. To optimize B cell activation, they need to be co-stimulated by CD4+ T cell receptors (our helper cells). After activation, selection and expansion of a B cell clone that produces the most specific antibody, B cells become either plasma cells or memory B cells. Plasma cells are the cells responsible for antibody production, which they can do for about a month post-infection. Memory B cells are the body’s memory of that infection. Remember how I said that adaptive immunity can take several days? This is because the process of activating B and T cells, selecting for a specific antibody, and expanding the desired clone takes a while. However, memory B cells save a record of that infection such that, if the same pathogen pops up again, the antibody can more quickly be made (T cells also have memory cells!). 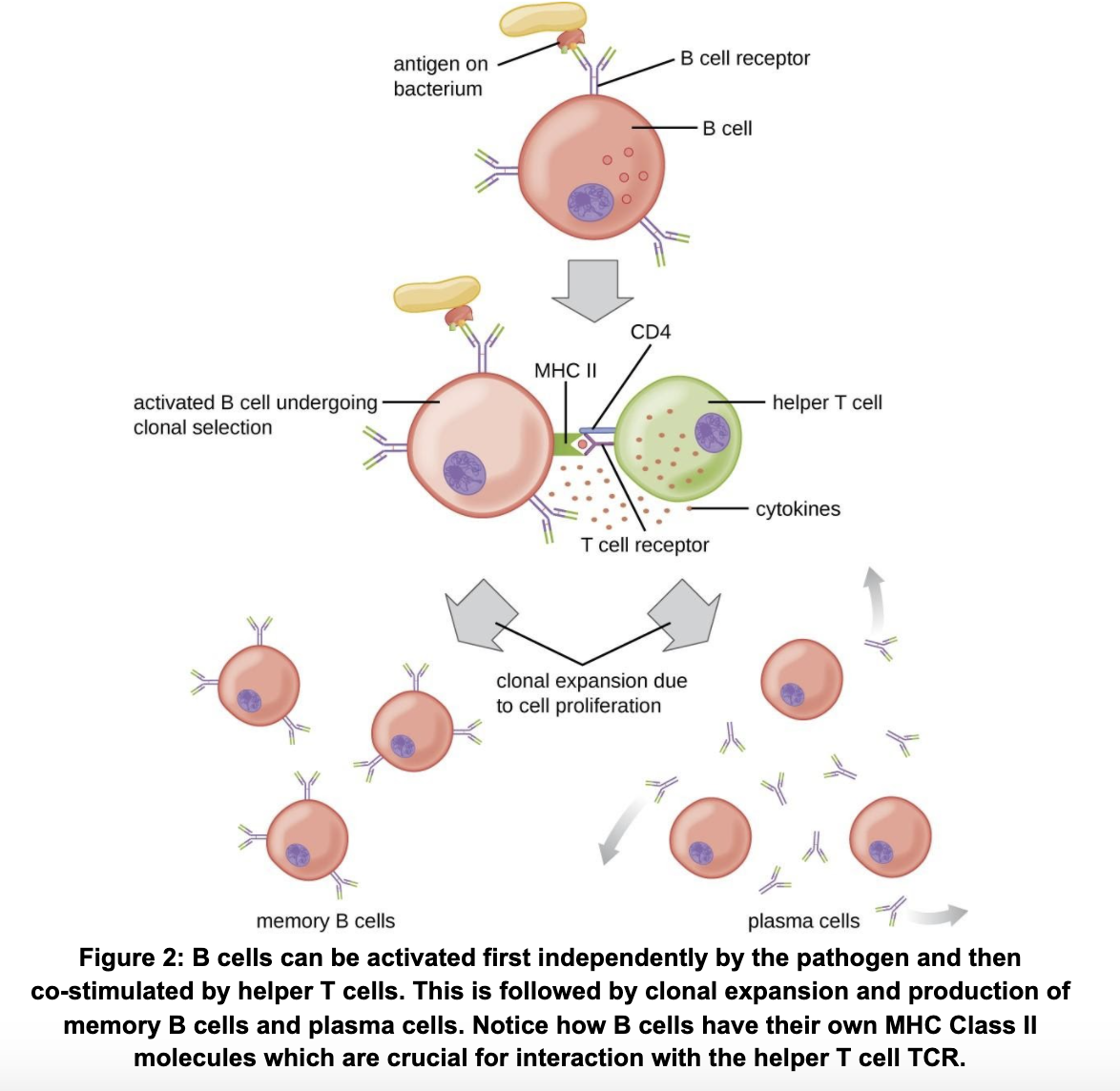 We did not get to cover all the different players in the immune system, but here are some honorable mentions:

Natural Killer (NK) cells are similar to CD8+ cytotoxic T cells (they actually evolve from the same common lymphoid progenitor) with the same killing machinery. However, NK cells do not have T-cell receptors and function more like innate immune cells by killing non-specifically.

T-regulatory (Treg) cells are a special type of CD4+ T cells that work to protect the body against autoimmune disease. They are generated during negative selection in the thymus (not discussed in this blog post but highly relevant).

Eosinophils are similar to neutrophils and work against parasitic infections. They are one of the key players in allergic reactions.

Mast cells are non-specific cells that interact with the adaptive immune system. They produce granules containing histamines and other chemicals which they release when antibodies attach to them. They are another key player in allergic reactions.

Basophils are also similar to neutrophils and also release chemicals that are important for inflammation, especially in allergic reactions.

And there you have it! This is by no means an exhaustive overview of all the components of the immune system. However, it should give you a good place to start in terms of understanding what some of the key players are and how they work together to keep your body safe from the scary outside world.

Our biology tutors are doctoral candidates and PhDs. Our team also includes MD candidates, MDs, and MD-PhDs. We can work with students of all ages to deepen their study of biology. In all tutorials, we take a highly structured and personalized approach to ensure that our students receive the most effective and comprehensive tutoring available.

Most of our tutors have served as teaching assistants for hundreds of undergraduates, many of whom are encountering biology for the first time. We have extensive experience working with high school students studying for introductory courses and AP exams, as well as pre-med and medical students tackling upper level biology courses.

Hormones of the female reproductive system

July 6, 2022 How to conquer the biology/biochemistry MCAT section
April 1, 2022 Linkage and association mapping in genetic analysis
March 21, 2022 How to tell the difference between mitosis and meiosis
January 3, 2022 A brief primer on the secretory pathway
November 12, 2021 Tips for studying biology
May 26, 2021 Fetal circulation: three shunts, one rule
April 23, 2021 Cells and Burning Stones: Robert Hooke’s Contribution to Science
March 1, 2021 Hormones of the female reproductive system
February 26, 2021 Gametogenesis and spermatogenesis and oogenesis, oh my!
See all
navigate_beforeEdit Filters closeClose
Clear Tags closeClose