The GMAT Tutor: Hands Off My Data Sufficiency!

Data Sufficiency questions are unique to the GMAT.  Usually, students try to answer them with a mad scribble of flowcharts and hastily-struck-through words.  Today, our GMAT tutor shows you how to be more efficient.

When I started GMAT tutoring, I had to reacquaint myself with the test – it had been three years since I’d taken it, so there were a couple rough edges that needed polishing.

After I got back into midseason form, I paused to reflect a bit about how my approach to the questions had changed since I began to care again about things like the combined speed of trains moving from opposite directions, the number of ways to arrange ice cream cones, and the wonderful properties of special right triangles.

As I regained my groove in Quant, the single-biggest change was this: I was doing far less writing in order to solve Data Sufficiency questions.

I had always remembered that DS questions can often be answered without fully solving the equations, but it took me a few rounds of practice tests and sample questions to overcome my initial tendency to begin moving my pencil the same nanosecond that the DS question appeared on the screen. Instead, I began to take a full 10 seconds to chew on the question in order to be sure I had identified the WATRA (What Are They Really Asking?)

I noticed that I had simultaneously improved both speed and accuracy as I embraced this approach. I began calling this the HOMDASU principle, using a quickly-conceived acronym for Hands Off My DAta SUfficiency!

I have emphasized HOMDASU with students, and seen a familiar pattern result. First, it takes real effort to overcome the tendency to want to dive right in – those 10-20 seconds spent without moving the pencil can seem like an eternity. Soon, however, students find that the extra time spent on reflection helps them spot the frequent patterns used by the GMAC for these questions. The result is a nice boost in DS accuracy, with the added bonus of time saved by not spinning one’s wheels from the outset by doing unnecessary work. 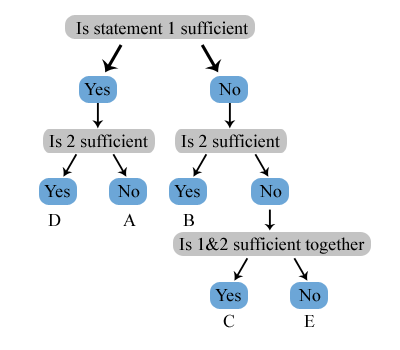 Let’s take an example. Suppose a DS question asked you this:

The wrong approach here would be an immediate, frantic storm of scribble marks, plugged-in variables, and strikethroughs to determine whether either, both, neither, or a combination of these statements could adequately answer the question. Instead, take that initially-awkward-feeling 10-20 second pause to look deeper at the statements. Without even moving a single wrist muscle, you’ll see that cross-multiplication in Statement 1 can quickly render it as identical to Statement 2. Once you realize the statements are saying the same thing, you’re down to just two possible answers – it has to be (D) or (E). Now, go back to the question – to get it into that format, you can divide all the terms in either of the now-identical statements by 6. Because t/6 + u/6 must equal 2, the answer is (D).

Here is another example:

The integer x is how much greater than 1?

An approach to a DS question like this that involves any writing is a time vampire that no test taker can afford. Nothing has to be determined here – even if you had no knowledge of exponent rules, or powers of 10, you could know that x represents some particular value. (It just so happens here that the value of x is 6 – but you didn’t need to know that). Any time you can determine this with a single variable, the answer either has to be (A), (B), or (D). In this case, it’s (D), because BOTH statements are set up in a way that only allows one x value.

Certainly, many DS questions will require test takers to write before they can find a solution. However, a surprisingly-high percentage can be solved much faster, and with far less physical exertion, by test-takers who embrace the HOMDASU approach.

To any student out there struggling with DS, I urge you to try this: For the next several DS questions you review, force yourself to spend between 10 and 20 seconds reading and examining the question before you allow yourself even a single mark on the paper. This will seem awkward and uncomfortable at first, but the long-term payoff will be quite rewarding.