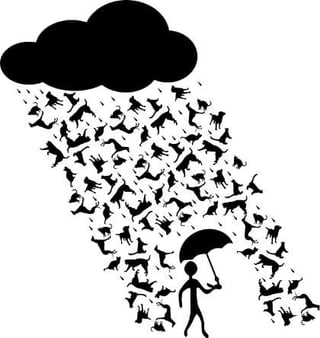 One of the recent lessons I gave to my English Language Learners involved English idioms and their origins. An idiom is a saying that does not mean what the words literally express, but rather it has some representative meaning behind the words. Often, the reasons for the meanings of idioms are obscure; in this post, I will try to bring to light a few commonly used idioms and where they come from.

If you are not a native English speaker and someone told you to break your leg, you might be offended, or at least somewhat confused. This saying serves as an expression of good luck wishes to an actor or actress before they go on stage for a performance. Of course, the intended message is opposite what the words imply: we do not actually wish for an actress to break her leg during a show. Instead, we hope that the show will run smoothly, without injury or mishap, and that the actress will give a great performance.

The rumor is that this phrase initially arose out of a superstition that saying good luck to a performer would in turn bring bad luck. To avoid such an outcome, people began to use this phrase to make the contrary true: by wishing bad luck, the actor would receive good luck.

In fact, English is not unique for having this particular idiom. In the Italian version, the same logic applies. Wishing someone buona fortuna (the literal version of good luck) is considered unlucky. Instead, one wishes another "in bocca al lupo" which means "in the mouth of the wolf." It is said that the phrase comes from hunters who wanted to compensate for the risk of being devoured by their prey by expressing the very thing they hoped would not happen (that the hunter ended up in the wolf's mouth). The corresponding response is, accordingly, "crepi il lupo" or "may the wolf die" – this with the hope that the hunter will win in the end. In a more general sense, it is a good luck wish to someone about to meet a conflict or an adversary face to face.

To Feel A Bit Under the Weather

Many of my students thought that the image this phrase conjures up suggested that it meant to be unlucky, to feel emotionally down and out, or to face lots of unfortunate circumstances that all occur at once. In reality, it means to feel a little sick, physically. The term comes from sailors who, during a storm, would feel seasick when the boat began to rock in extreme weather. As a result, they would go below deck, where they were safer from the dangers of the storm, such as lightning. Thus, being under the weather (in the lower level of the boat) equated to feeling seasick because of that weather.

Beat Around The Bush

"Are you going to the mall today?"

"Oh, that's funny, because I was also hoping to go to the mall today but I unfortunately don't have my own car...so it would be really great if I could somehow get a ride...."

This is the example I used to demonstrate beating around the bush, an idiom that my students had not heard of but were able to recognize based on this brief example dialogue. It means to speak around the central point, rather than addressing it directly.

This phrase also comes from hunting, for hunters would hit the ground surrounding a bush where birds were hiding, to scare them out and into the air where they could become easy targets.

Once In A Blue Moon

Something that happens once in a blue moon happens very rarely. For example: Our family eats out once in blue a moon, but almost always we prefer to cook at home. The origin of this phrase comes from the definition of blue moon. According to the dictionary, a blue moon is the second full moon to occur within the same calendar month. Usually, the moon appears completely full one time per month, but occasionally there is a second full moon appearance – every 32 months, to be precise.

Hear It Through The Grapevine

If Sarah told Sophie who told Andrea who told me that a mutual friend had just gotten engaged, I would say I heard it through the grapevine, meaning that I found out about this piece of news through many other people. I did not learn it from the source itself (the bride-to-be, in this example) but rather I heard it indirectly after it was passed from one person to another. It is often used to refer to a piece of gossip or to a story whose truth may or may not yet be confirmed.

The origin of this phrase dates back to the mid 1800s, when the invention of the telegraph changed the popular mode of communication. The wires of the telegraphs, it was said, resembled the intertwined stems of a grapevine, and thus represented the process of passing on a message from one point along the line to another.

Get support in your studies of the English language by connecting with one of our incredible tutors!

Are you interested in reading more on the quirks of the English language? Check out some of these posts below:

How do I Succeed as an ESL International Student? 8 Essential Solutions